I am reading a book called Christ and Apollo by William F. Lynch. Matt asked me if I liked it and I said that I liked the ideas, but not necessarily the way they were expressed. I think it's because it's something called literary criticism, which I know next to nothing about, and I don't like things that I don't know anything about. (I am aware of this fault of mine, and when I see it, I say "My dogs are barking!" in reference to Socrates' description of the spirited part of the soul as a guardian dog, who barks at people that he doesn't know, and welcomes people that are familiar to him. Once you start looking for that dog, you see him all over town, including at your front door.) I find the writing basically boring, but the ideas are interesting.

Lynch identifies two tendencies in approaches to art (specifically literature) which he says have significance for the way we live our lives. One is towards the "Christic," the incarnational embrace of the definite, of particulars, of time, of our limited experience. The other approach is "Apollonian," in that it seeks the absolute, the infinite, the heavenly, and wishes to discard or "transcend" the limitations of human experience in order to achieve, in a word, divinity. Lynch, a Jesuit, of course does not reject the pursuit of "insight," as he calls it, but maintains that it is to be found in attention to and even adoration of the details of the material, temporal human experience.

It reminds me of one of my favorite bits from Dante. In Paradiso, St. John the Theologian questions Dante on the history of his love for God and his ascent to Paradise. Dante has been drawn upwards by his love for his girlfriend, Beatrice (who is in Paradise,) as well as his veneration of his patron poet, Virgil, but St. John presses him even further to confess where he first learned to love, and Dante answers:

I love the leaves wherewith enleaved
is all the garden
tended by that eternal Gardener.

Not only does each single leaf point to the whole of creation, but in some way each part contains the whole, so that Dante's love for each Created Thing is really a love for all Creation. I like that. It is an apt description of what I think constitutes Good Art, and it seems to me to be a healthy attitude towards life as well.

I was thinking about this when I was pushing Scott in his stroller. I thought about how good it is that Orthodoxy teaches us to love Creation through the many, many "blessings" that we do for all of its parts-- people, plants, food, bodies of water, homes, even man-made things like cars. A blessing affirms and even commands the goodness of things. I wondered if there was a blessing for strollers, because I am terrified of Scott rolling into the road. I tried to remember if I had ever seen an Orthodox blessing for animals that were not currently being eaten in roasted or cured form, because I was about to pass the Episcopalian church where I had seen signs for weeks advertising the Blessing of the Animals (which prompted me to make a wicked joke in my head about not being able to tell if Pride Week came in October this year, or if it was just the Blessing of the Animals at the Episcopalian Church.) And lo and behold, as I passed the church, I came upon a circle of people with dogs, listening to a priest read the bit from the Gospel about the sparrows of the air and the lilies of the field. Scott and I rolled up to listen and watch the priest bless each animal with holy water. I was a little bit skeptical and even prepared to make more somewhat mean jokes to myself as I approached, but I couldn't help smiling and feeling my heart melt a little bit when I heard the priest say:

Yesterday I bought Scott a big box of Huggies. It cost $23.99 for 80. They are really, really good. We had been talking about getting disposables for night time because the bigger he gets, the more pee he makes, and the more he soaks the bed. We've tried every combination of cloth diapers and intensely absorbent hemp inserts, but he always prevails. He has been sleeping on a towel so that we don't have to wash the sheets and mattress cover every dang day, but I hate that because it gets all bunched up. Thinking about buying disposable diapers made me very sad, because I know that they just end up in a landfill and will never, ever decompose, not in a million years. So I put it off, and then the other day when we went apple picking, I left him in his diaper for too long, and when we got home, he had a nasty rash. All the cloth diaper configurations rub him in exactly the same place, and there was no way to make him comfortable (except just letting him go sans diaper, which I did for as long as possible.) So my sadness about hurting my baby defeated my sadness about hurting the planet and future people and animals and I bought the Huggies. And now for the next 79 nights I won't wake up in a puddle of urine. That's nice.

Women who take care of the home, especially when children are in it, are constantly dealing with the immanent, material world-- the world of chopping vegetables, doing dishes, folding laundry, making the bed again, cleaning up pee and poop and vomit and snot, giving haircuts and baths, fixing broken stuff, buying all the things that you need to perform these actions, etc, and repeating all these things often. There are so many little decisions to make and actions to take all day long, and in all of them one is trying to make the best use of material resources that she possibly can. For some, that just means doing the cheapest thing. Others add "the quickest thing." Many add "the healthiest thing," and increasingly, people are adding "the thing that least screws over the environment." I try to hit all four of these criteria and it is rather emotionally draining. Having very high ideals about eco-friendliness and health makes it awfully difficult when the money and the time are both so short. Here is a diagram to illustrate what I mean. This is just about food (which is the biggest one because I have to make choices about it like, every hour.) 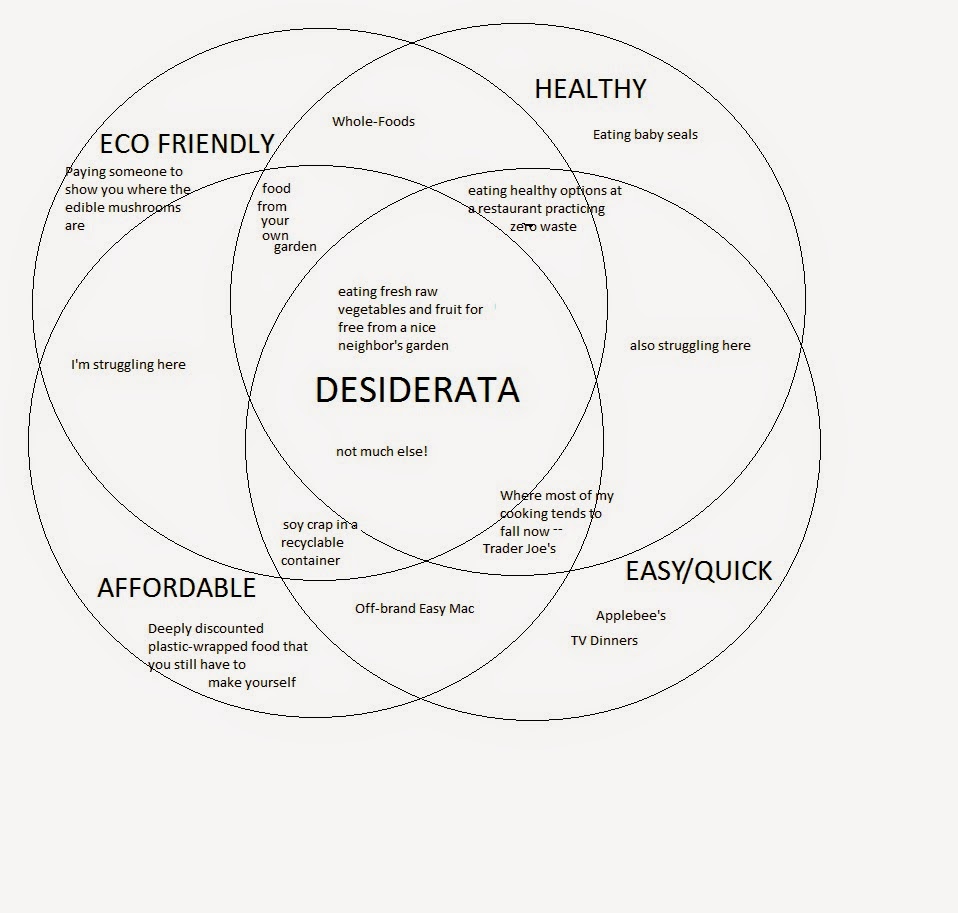 Not pictured: Lenten food (don't even get me started) or tasty food, because given my preferences, I believe that it's a subset of healthy food.

There are flaws with this diagram-- when you have four or more circles, not everybody can sit next to each other, so there are some scenarios which will not fit on the diagram at all (like something that is healthy and affordable, but not eco-friendly or easy/quick, such as many meals cooked from scratch using grocery store ingredients in lots of plastic.) And obviously I had to reach for something ridiculous to illustrate food that is healthy, but not eco-friendly, easy/quick, or affordable. But it serves to illustrate my thought process with every dang grocery store purchase or recipe selection, and now you can see where most of my anxiety comes from. I think it was easier for moms when all they had to worry about was affordable and easy, because they didn't really question whether the food in the grocery store was healthy or not, and nobody cared about the pelicans. But my god, the future of the human race depends on whether or not I am too selfish to make my own glue from flour and water and Death rattles a little closer to our door with every box of sugary granola that I just keep buying these days.

I went to church today with Scott for the feast of the Protection of the Mother of God, which is the patronal feast of the church we've just started visiting. I found it so peaceful and refreshing to cease my calculations and take a break from the game of hopscotch I've been playing between these circles. Peace and joy are floating somewhere above them, and I keep thinking I'll reach them if I can just build my house in that middle section, but more likely I just need to walk away.