A few weeks before wee Scott was born, I was listening to a lot of Search the Scriptures with Dr. Jeannie Constantinou, in particular the talks on Deuteronomy. She tends to go off on tangents, which I sometimes like better than the actual Bible study part, because she gets all riled up and becomes more of the sassy Presvytera Jeannie than the professorial Dr. Constantinou. Anyway the last rant that I listened to lasted for a couple podcasts, and concerned the matter of ritual impurity, specifically that of women. She firmly stated that there is no such thing in Christianity. There are no unclean animals or people anymore. Menstruation and childbirth do not defile a woman and make her unfit to touch holy things. (You do not have to abstain from communion when you are menstruating!) She takes a look at the prayers for a woman returning to church after childbirth and while there is talk of cleansing and defilement in these prayers, they are clearly asking for God's grace in purifying the woman spiritually, not physically. What she said next struck me: The new mother needs to pray for spiritual cleansing because she's been away from church for a long time and probably has done some sinning.

I have thought about that a lot since Scott was born because HOO boy she was right. You might look at a new mother and think it's all rainbows and little baby kisses etc., and it is certainly very romantic much of the time, but it's also an emotionally tumultuous time, and there are a countless occasions for bitterness, anger, self-pity, remembrance of wrong, envy and pride. New parents can get very depressed and frustrated because while every minute is worth it, the "it" that every minute is worth is difficult.

The Mother of God is becoming my best friend in a new way. I really, really need her help, and she always comes through. When I returned to church I was struck by the familiar praise: "Without corruption/defilement you gave birth to God the Word." I never thought about that much before; I assumed that it simply referred to the biology-defying miracle of the Virgin birth. It does, but now I see how miraculous it truly is. The Theotokos did not merely bear Christ while remaining a maiden physically, which is amazing in its own right. More astonishingly, she became a mother without becoming a crazy bitch. She resisted all of those temptations to post-partum despair and bitterness and hoped in God, even though she knew this would happen: 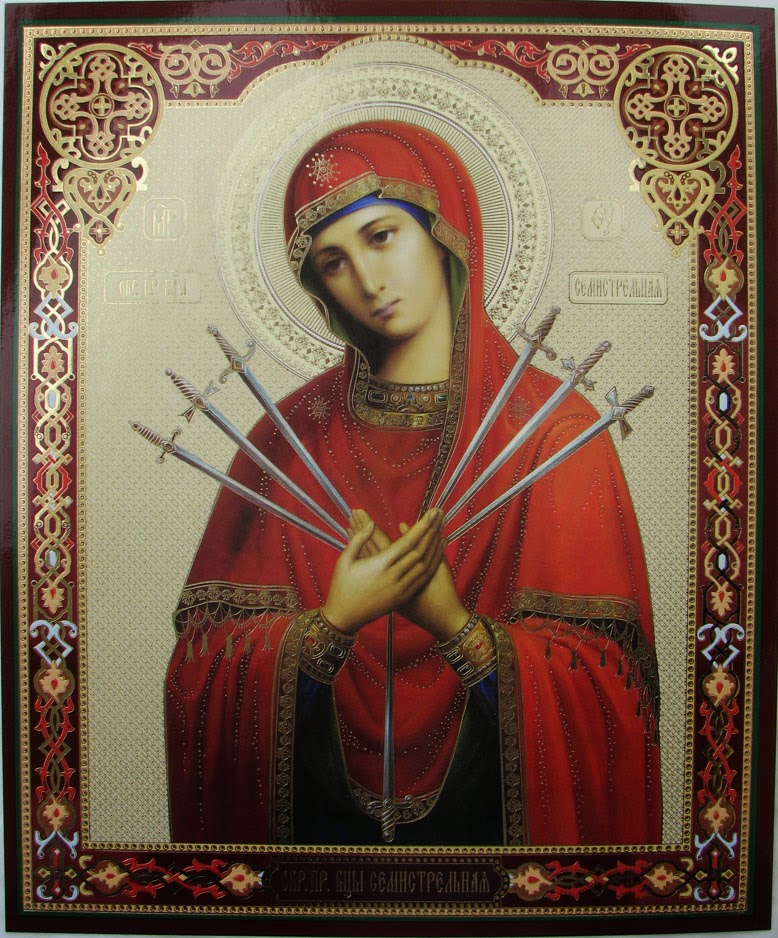 We have this icon (one like it anyway) and I used to think it was maudlin, but now I find it very comforting. My heart is outside of my body now, squirming in a cradle over there, and anything could happen to it. ("Please God, don't let the eagles get him like they got Johnny G." -Anne Lamott) But it's all already happened to Mary, and she made it.

The thing that I hope you understand about the Mother of God is that she isn't a goddess. There would be no hope for me if she were. She was a woman, and because she gave herself completely to God, she fully realized her potential, and became exactly the person she was created to be. The thing you should always remember when you think about the Mother of God is If she can do it, I can too.